This recipe assumes that you have an active sourdough culture to work with.

Start the recipe two days in advance to marinate the olives.

The following day make your basic dough by mixing the flours, water, salt and starter in a mixer fitted with a dough hook. Mix on a slow speed for approximately 10 minutes, until you have a firm, stretchy dough.

After 7-8mins integrate the olive and herb mix slowly until it's evenly spread into the dough.

Place the dough into a large bowl and cover with cling film, and then rest for an hour.

Fold the dough a couple of times (literally fold it in half with your hands,). This builds strength and structure in the dough so it rises nicely. Rest it for another 45 minutes, and then repeat the folding and resting two more times.

Preheat your oven as hot as you can get it.

Turn the dough out onto a lightly floured bench and cut it in half. Knead each half gently on the bench for about a minute and shape it into a round ball. Place the dough into bannetons or small mixing bowls lined with a clean cloth. Put one of the loaves in the fridge and leave the other at room temperature until it’s risen by half.

Once the loaf that you have left out has risen, place it into a Dutch oven (we use a Le Creuset cast iron casserole with a lid). Pour 50ml boiling water into the bottom of the dish and place the lid on top. Bake it for half an hour with the lid on, and then remove the lid and bake for a further 5-10 minutes until you have a nice golden crust.

If you want to bake both loaves on the same day, remove the second loaf from the fridge when you put the first into the oven. Allow it rise by half (this one will take a bit longer as it will have to come to room temperature first) and then follow the baking instructions as above. Or if you have two Dutch ovens and a large oven you could bake them at the same time.

If you want to keep the reserved loaf aside to bake another day, you can keep the unrisen loaf in the fridge for up to two days before baking. 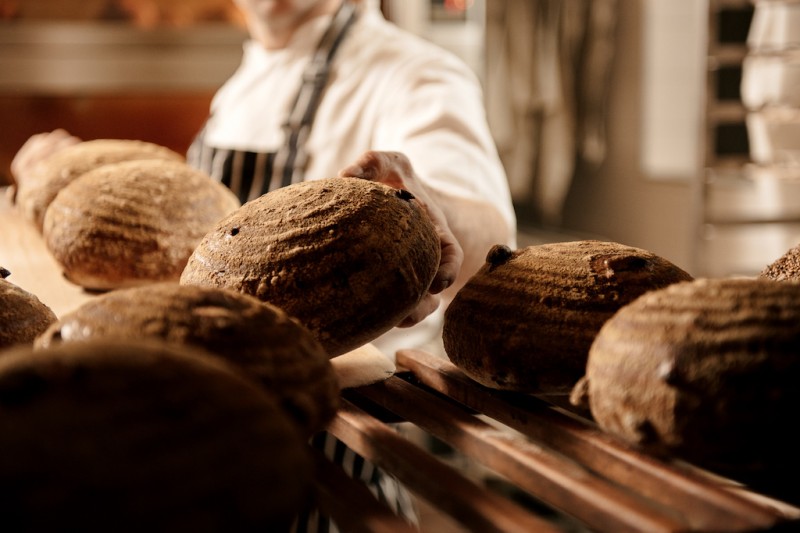 We are very proud to be the provider of the pitted kalamatas and pitted green hardy mammoths in Tivoli Rd Bakery's ever popular olive sourdough. Head baker Michael James provides the recipe for the perfect olive sourdough.

Sign up today to receive your free breads and baking recipe e-book, featuring a range of recipes from some of Australia's best bakers!