To many of Melboune's food community, Chef Paul Wilson needs no grand introduction. Chef Wilson (or Mr Wilson as you may know him on social media) is simply one of Melbourne's iconic chefs and his association with Mount Zero goes back literally decades, to when fine dining was the realm of 5 star hotels and Paul was executive Chef at the then Radii (Park Hyatt). Having had an integral influence in the fine-dining scene, Chef Wilson's forward-thinking continues to play a conductor-like role in lifting Melbourne's culinary landscape.

We have been lucky enough to work with Chef Wilson over the past month, in preparation for our upcoming Pressed event. In anticipation of the event, we sat down and asked Paul a few questions about his culinary journey.

1. Can you tell us a little about your background? (What led you to the industry and some of your career highlights to date.)

I left school as early as possible at the age of 16, after part-time work with my Spanish neighbour, who was head chef of a Mayfair hotel, called the Stafford, located in the heart of Saint James, Piccadilly.

The bright lights and glamour of London,  coupled with outstanding hospitality experiences, meant I was hooked! I went on to work in top hotels like the Ritz and the Dorchester, until I settled into a Michelin starred kitchen, at the Oak Room, in Le Meridien Hotel, Piccadilly. Next, an experience with Albert Roux at the Hanbury Manner, taught me cook refined French food.

Hungry for more, I sought out management experience,  taking on the role of sous chef, at London's busiest 'IT' restaurant, Quaglinos. We served 900 customers a day, with a Michelin Red M, it was an unforgettable experience!

Five years later, I became a renowned international chef after being awarded a Catey Acorn award, in recognition of being one of London's youngest ever executive chefs, I was 25 at that time, in charge of London's still most successful restaurant (Quaglinos).

After such an intense period of my career, I felt the need to travel and was offered an opportunity in Melbourne, setting up three venues within a forward-thinking retail concept called Georges.

Being a little ahead of its time, the store struggled to make an impact, but our food venues did, and I was offered a role with the Park Hyatt looking after their flagship restaurant. The 5-star hotel food scene was quite competitive then, with many gifted chefs running their kitchens.  I put my head down and dedicate myself to cooking brasserie styled food, with a heavy influence from the local produce available - it was the most original food a hotel was serving and became an incredible success (earning 3 chefs hats and Chef of the year).

The success of the Park Hyatt led to many more restaurant openings' and commercial success working with Australia's most driven, creative restaurateur's. This work resulted in my Epicure professional excellence award, one of Australia's highest hospitality professional awards.

From there, I've become a hospitality consultant and restaurateur. Today my only focus is giving back to an industry that has afforded me so many wonderful experiences in my life.

2. What's your favourite dish and why?

A perfectly roasted chicken, because it demonstrates your knowledge and attention to detail while pleasing so many! It involves intricate technique's to achieve an outstanding result, from the sourcing of an ethically farmed chicken to the delicate brine its marinated in, to the way you butcher, flavour and cook your roast. Accompanied with seasonal vegetables, makes for one delicious, humble meal.

3. Where do you source your produce?

We are so lucky to have such amazing local seasonal produce over the years and its peaking right now! 90% of my produce, is coming from Country Victoria's small organic and biodynamic farms. It's the best produce I've ever tasted!


4. What's the most heard feedback from your customers?

I have a rather large chopping knife, ½ cleaver ½ Chinese carving knife,

Custom made in Hong Kong. It's 20 years old. I use it every day for so many tasks.

6. What would you be doing if you weren't in the food business?

7. What word(s) do you use to describe your favourite Mount Zero Olives product?

Every year I sincerely look forward to the new season of olive oil. It's always beguiling and extraordinary!

8. We are creating a Foodie's bucket list – please add your favourite place to eat out – somewhere everyone MUST GO!

The food markets of Mexico City & Lima Peru are a spectacle, where you can sample flavours that you will never forget across the most diverse array of ingredients in the world.

9.  Do you have a favourite "foodie" moment from art, film; or novel or poem – or perhaps a wonderful moment in your own life you'd like to share?

A Foodie moment in a movie I like is the scene from Chef; where Chef cooks Spaghetti Aglio for his girlfriend.  My own favourite experience is having many meals with Anthony Bourdain, the most unusual was in NYC, in an illegal Japanese restaurant serving chicken carpaccio.

10. Do you have special plans or dream projects planned for the year ahead?

I am looking forward to visiting my family in the UK, Visiting London markets and hot restaurants.

More about Paul Wilson can be found on his site: http://www.mrwilson.com.au/MrWilson.aspx Inspired by a recent trip to Spain - and plenty of pintxos! - this month's Mount Zero Hero. James Gibson has recreated a popular dish using Mount Zero products, that you can find on the menu at summertime favourite Arbory Afloat. READ ON 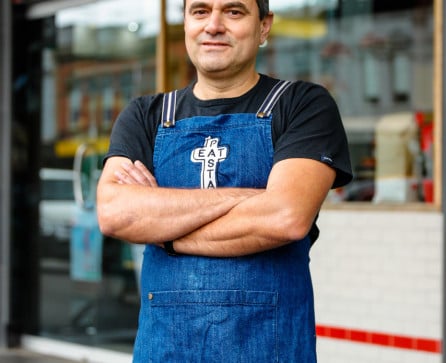 Paul Baker is the Head Chef of the Botanic Gardens Restaurant in Adelaide, one of the ‘hottest’ restaurants in the country, as voted by Weekend Australian Magazine. READ ON