At 33 years of age, Executive Chef Stokehouse Richard Ousby has been named a ‘baby-faced assassin’ by the media.

His friendly and relaxed countenance is seemingly worlds away from celebrity chefs who famously rule their kitchen’s with ire and fire.

Born in NSW, Richard set his sights on a career in the kitchen from an early age. “Keeping in mind, at this stage there was no such thing as glamorous, celebrity chefs to be found in Bathurst!”

Inspired by cooking with his mother and grandmother, today his approach to food is simple. “I love using local and high quality produce to create fresh flavours that are not overworked, just really casual and approachable dishes.”

Starting out in Brisbane, Richard apprenticed in a family owned Italian restaurant, training that he continued and completed in a small hotel.

He then accepted an opportunity to move to England, to work for Michael Roux at the Waterside Inn. There, he learned about classical French cuisine and the rigorous demands of working in a high performance kitchen.

Richard then joined Stokehouse Q (Queensland), where he received the 2012 Acqua Panna & San Pellegrino Global Cooking Cup Awards, Young Chef of the Year Award Winner and was promoted to Head Chef in 2013. In 2015 he became Executive Chef for Stokehouse restaurants.

Today Richard - and his favourite golden spoon – splits his time between Brisbane and Melbourne, working with Stokehouse St Kilda Head Chef Ollie Hansford, to oversee both Stokehouse venues - his manner blending easily with the relaxed, sophisticated crowds who flock to the landmark restaurants by the water.

Can you tell us a little about your background? What lead you into the industry and into cooking?

I grew up standing beside both my mother and grandmother in the kitchen making dishes such as salted lambs tongue and freshly baked bread, memories that still resonate strongly with me. My passion for food never left me – when all of the other kids were saying they wanted to be an astronaut or a fireman, I always said I wanted to be a chef. Keep in mind, at this stage there was no such thing as a glamorous, celebrity chef in Bathurst!

What are your career highlights to date? The first thing that comes to mind as a true highlight are the opportunities I’ve had to meet, tour, and work with Australia’s best producers – as a result, I get to have highlights on a regular basis.

What is your favourite menu item currently and why? Tuna ceviche, ruby grapefruit dressing, sea succulents. We recently welcomed a Peruvian chef to our team, which has shed light on their cuisine, ceviche in particular, I was previously flying blind in! I really enjoy having a multicultural kitchen as it helps to drive our food in a number of unexpected directions.

Where do you source your produce?  Australian produce is phenomenal – it has, in my mind, some of the best food in the world. As a result, I source it from wherever I need to, to get the best.

What is the most heard feedback from your regular customers? It varies between our venues, at Stokehouse Q guests love the pairing of fine dining with a relaxed Queenslander atmosphere, whereas at St Kilda guests tend to appreciate the seamless service style with views of the beach – it almost feels like an escape from the city.

What is your favourite kitchen tool? I have a golden spoon which I am forever losing – but it’s like a boomerang, it always finds its way back into my pocket!

What would you be doing, if you weren’t in the food business?  I’ve often thought about this... I contemplated being a builder for something like two days when I was living in England. It was cold and miserable. My partner and I were running out of money even though I was working 90 hour weeks! That idea fizzled fairly quickly though.

What is one word you would use to describe describe Mount Zero Olives Unadulterated!

We love to ask our Mount Zero Hero guests what food experiences you would add to a foodies bucket list – what would be your recommendation? Sitting at the creek in Niguelas, Spain, eating Jamon, fresh tomatoes and fresh bread in beautiful weather. I almost don’t want to share it… I want it to stay untouched! Are there any special plans or dream project coming up for you?

I’m heading to Japan for Christmas which will be a change. Work wise, it’s business as usual.

Thanks Richard, enjoy Japan and thanks again for your time - and for sharing your recipes with us! Fresh, healthy and delicious salads just make so much sense in the Spring and Summer months. Here's 5 of our best. READ ON 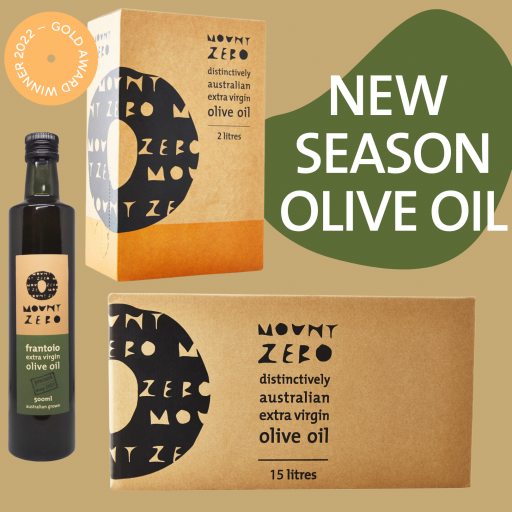